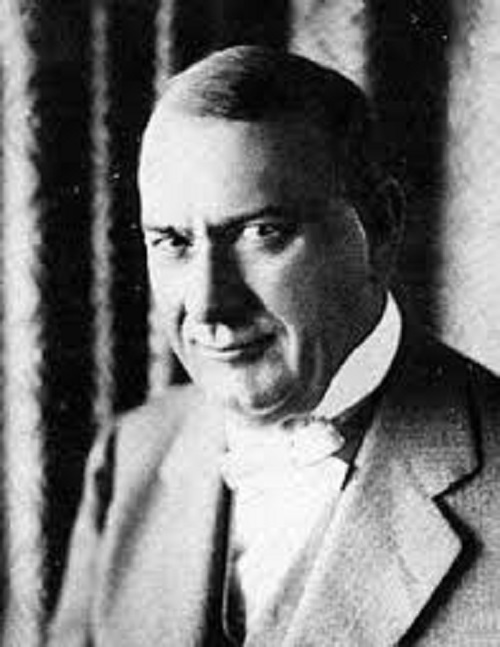 “Advertise, advertise, advertise the King and his Kingdom!” This was the rallying cry of Joseph Franklin (“Judge”) Rutherford, second president of the Watch Tower Bible and Tract Society. Rutherford was the force that transformed Charles Taze Russell’s passive and obscure Bible Students into zealous, doorbell-ringing Jehovah’s Witnesses. His pugnacity toward other religions, in particular Catholicism, so infected the Witnesses that Stanley High, writing for The Saturday Evening Post in 1940, accused them of making hatred a religion.

Born November 8, 1869 in Morgan County, Missouri, Rutherford lived a harsh life on his father’s farm. He sought to escape by studying law, but his father demanded he hire a man to take his place on the farm as well as pay his own tuition. It is a testimony to Rutherford’s determination (or perhaps desperation) that he managed to meet his father’s conditions.

Upon admission to the state bar at 22, Rutherford worked for four years as public prosecutor, acquiring the nickname “Judge” through occasional stints as a substitute judge. The young lawyer was visited in his offices one day in 1894 by Watch Tower Society representatives. They sold him a set of Russell’s Studies in the Scriptures. He was baptized as a Bible Student in 1906 and soon became the Watch Tower Society’s legal counsel.

Russell’s death in 1916 created a power vacuum. He had picked no successor, evidently believing none would be needed before Armageddon, and several people wanted the job. Rutherford edged out the competition by gaining a majority on the board of trustees through quasi-legal maneuvering. The release in 1917 of The Finished Mystery, purportedly Russell’s final work, caused a deeper rift within the Society. Many Bible Students left to form groups faithful to Russell’s vision, some surviving to this day.

As America prepared to enter World War I, the anti-war, anti-government message of The Finished Mystery brought the wrath of the United States judicial system down upon the Bible Students’ heads. In 1918 Rutherford and seven other Watch Tower officials were convicted on charges of sedition. Though sentenced to a total of six hundred years in the Atlanta penitentiary, the Judge and his fellow inmates were released in 1919 and later acquitted of all charges. The experience made him bitter, and he emerged breathing fire against all the clergy of Christendom, whom he held responsible for his incarceration.

Rutherford realized the Bible Students were in danger of further disintegration. Many members were dismayed by Russell’s death prior to Armageddon. Rutherford replaced Russell’s books with a steady stream of his own, insisting that doctrinal changes were “new light” cast on Scripture by Jehovah. He consolidated power by replacing elected congregation elders with Society- appointed men. He castigated as idolaters those who revered the memory of Russell, making life intolerable within the organization for loyalists. The pages of his books and of The Watchtower soon were filled with attacks against other religions, the most vicious being reserved for the Catholic Church.

Rutherford reformed the Society by condemning holidays and Christian symbols as pagan (but look at this issue’s cover photograph, which shows Rutherford engaged in Christmas festivities a few years before instituting his reform). Birthdays, hymn-singing (restored after Rutherford’s death), flag salutes, and the cross were given up by the Bible Students at his command. In 1931 he gave them their new name — Jehovah’s Witnesses — claiming Isaiah 43:10 as a proof-text. Rutherford pushed them to go door-to-door, carrying bulky phonographs upon which they played his fiery denunciations of the world and of organized religion.

Despite these changes, Rutherford retained Russell’s greatest weakness, setting dates for Armageddon. He asserted in his booklet Millions Now Living Will Never Die that Abraham, Isaac, Jacob, and other Old Testament notables would be resurrected in 1925, just prior to the final battle. He built a yet-standing mansion called Beth Sarim (Hebrew for “House of the Princes”) in San Diego and deeded it to these men of old while living in it himself.

It was at Beth Sarim that he died on January 8, 1942. He had wished to be buried on the property, but his neighbors became alarmed when Watch Tower officials began to construct a tomb. The local planning commission vetoed the Society’s efforts. The Watch Tower Society charged it with religious persecution, but the decision probably had more to do with the neighbors’ concerns about their property values.

Rutherford’s legacy, though muted, lives on. Today’s Witnesses are considerably better trained in presenting their faith than were those trained under Charles Russell, and long ago Witnesses discarded his recorded speeches and in-your-face methods, but they are still aggressive. His vitriolic hatred of Catholicism still burns in the message they carry and on the pages of The Watchtower.

by Cathleen A. Koenig

Published in THIS ROCK, December 1993 | See our research work on the Jehovah Witnesses Organization

Joseph F. Rutherford, TRUE Father of Jehovah's Witnesses and "Judge" Of All The Earth (37:15)