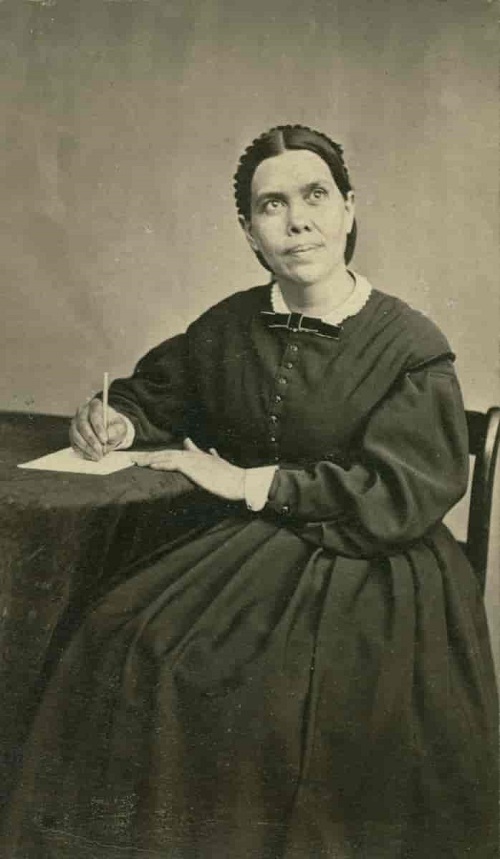 (1827-1915) Ellen Gould White was an American woman author and co-founder of the Seventh-day Adventist Church. Along with other Adventist leaders such as Joseph Bates and her husband James White, she was instrumental within a small group of early Adventists who formed what became known as the Seventh-day Adventist Church. White is considered a leading figure in American vegetarian history. Smithsonian named her among the “100 Most Significant Americans of All Time”. White claimed to have received over 2,000 visions and dreams from God in public and private meetings throughout her life, which were witnessed by Adventist pioneers and the general public. She verbally described and published for public consumption the content of each vision. The Adventist pioneers viewed these experiences as the Biblical gift of prophecy as outlined in Revelation 12:17 and Revelation 19:10, which describe the testimony of Jesus as the “spirit of prophecy”. Her Conflict of the Ages series of writings endeavor to showcase the hand of God in Biblical history and in church history. This cosmic conflict, referred to by Seventh-day Adventist theologians as the “Great Controversy theme”, became foundational to the development of Seventh-day Adventist theology. Her book on successful Christian living, Steps to Christ, has been published in more than 140 languages. The book Child Guidance, a compilation of her writings about child care, training and education, has been used as the foundation for the Seventh-day Adventist school system.

Ellen and her twin sister Elizabeth were born November 26, 1827, to Robert and Eunice Harmon at a home on State Route 114 in Gorham, Maine. She was the seventh of eight children. Robert was a farmer who also made hats using mercuric nitrate.

Charles E. Dudley Sr., in his book The Genealogy of Ellen Gould Harmon White: The Prophetess of the Seventh-day Adventist Church, and the Story of the Growth and Development of the Seventh-day Adventist Denomination As It Relates to African-Americans claims that Ellen White had an African-American ancestry. In March 2000, the Ellen G. White Estate commissioned Roger D. Joslyn, a professional genealogist, to research Ellen G. White’s ancestry. Joslyn concluded that she was of Anglo-Saxon origin.

At the age of nine, White was hit in the face with a stone. This occurred while she was living in Portland, Maine, and probably attending the Brackett Street School. This, she said, started her conversion: “This misfortune, which for a time seemed so bitter and was so hard to bear, has proved to be a blessing in disguise. The cruel blow which blighted the joys of earth, was the means of turning my eyes to heaven. I might never had known Jesus Christ, had not the sorrow that clouded my early years led me to seek comfort in him”. A few years after her injury, Ellen, with her parents, attended a Methodist camp meeting at Buxton, Maine; and there, at the age of 12, a breakthrough occurred in which she had a conversion experience and felt at peace.