WHO OR WHAT ARE THE TWO BEASTS MENTIONED IN REVELATION 13. WE DIG DEEP TO FIND OUT THE NATURE OF THESE BEASTS.

HOW WILL TTGM INTERPRET REV 13 REGARD TO THE BEASTS?
TTGM will use a literal approach to interpret the prophecy in Rev 13. We take it as written. We will then link the words written and compare them to other prophetic books in scripture as well examine the historical relations found. Symbolic words such as Beasts, horns, etc, will be revealed by what the word says.
Here are examples of prophecies that have been fulfilled in the past, you will notice the literal rendering.

To understand what we are looking at we will first identify the Beast mentioned concerning the mark.

(Rev 13:1-11 [KJV])
And I stood upon the sand of the sea, and saw a beast (#1) rise up out of the sea, having seven heads and ten horns, and upon his horns ten crowns, and upon his heads the name of blasphemy. 2 And the beast which I saw was like unto a leopard, and his feet were as the feet of a bear, and his mouth as the mouth of a lion: and the dragon gave him his power, and his seat, and great authority. 3 And I saw one of his heads as it were wounded to death; and his deadly wound was healed: and all the world wondered after the beast. 4 And they worshipped the dragon which gave power unto the beast: and they worshipped the beast, saying, Who is like unto the beast? who is able to make war with him? 5 And there was given unto him a mouth speaking great things and blasphemies; and power was given unto him to continue forty and two months. 6 And he opened his mouth in blasphemy against God, to blaspheme his name, and his tabernacle, and them that dwell in heaven. 7 And it was given unto him to make war with the saints, and to overcome them: and power was given him over all kindreds, and tongues, and nations. 8 And all that dwell upon the earth shall worship him, whose names are not written in the book of life of the Lamb slain from the foundation of the world. 9 If any man have an ear, let him hear. 10 He that leadeth into captivity shall go into captivity: he that killeth with the sword must be killed with the sword. Here is the patience and the faith of the saints. 11 And I beheld another beast (#2) coming up out of the earth; and he had two horns like a lamb, and he spake as a dragon.

WE LINK THE FIRST BEAST IN REVELATION (ch.13) TO THE BEAST THAT DANIEL (ch.7) SAW:

You will notice beast #1 in Revelation 13:1 compares directly to the fourth beast in Daniel 7. The fourth beast was never named, but it carried the likeness of the three beasts that were before it (lion, bear, and leopard).

(Dan 7:1-8 [KJV])
In the first year of Belshazzar king of Babylon Daniel had a dream and visions of his head upon his bed: then he wrote the dream, and told the sum of the matters. 2 Daniel spake and said, I saw in my vision by night, and, behold, the four winds of the heaven strove upon the great sea. 3 And four great beasts came up from the sea, diverse one from another. 4 The first was like a lion, and had eagle’s wings: I beheld till the wings thereof were plucked, and it was lifted up from the earth, and made stand upon the feet as a man, and a man’s heart was given to it. 5 And behold another beast, a second, like to a bear, and it raised up itself on one side, and it had three ribs in the mouth of it between the teeth of it: and they said thus unto it, Arise, devour much flesh. 6 After this I beheld, and lo another, like a leopard, which had upon the back of it four wings of a fowl; the beast had also four heads; and dominion was given to it. 7 After this I saw in the night visions, and behold a fourth beast, dreadful and terrible, and strong exceedingly; and it had great iron teeth: it devoured and brake in pieces, and stamped the residue with the feet of it: and it was diverse from all the beasts that were before it; and it had ten horns. 8 I considered the horns, and, behold, there came up among them another little horn, before whom there were three of the first horns plucked up by the roots: and, behold, in this horn were eyes like the eyes of man, and a mouth speaking great things.

AT THIS POINT WE IDENTIFY THE SYMBOLS:

The horns are kings. After these kings set up their kingdoms, other horns (kings) came after them and ruled.
(Dan 7:24 [KJV])
And the ten horns out of this kingdom are ten kings that shall arise: and another shall rise after them; and he shall be diverse from the first, and he shall subdue three kings.

The head is a person that rules over another/others.
(Exod 18:25 [KJV])
And Moses chose able men out of all Israel, and made them heads over the people, rulers of thousands, rulers of hundreds, rulers of fifties, and rulers of tens. 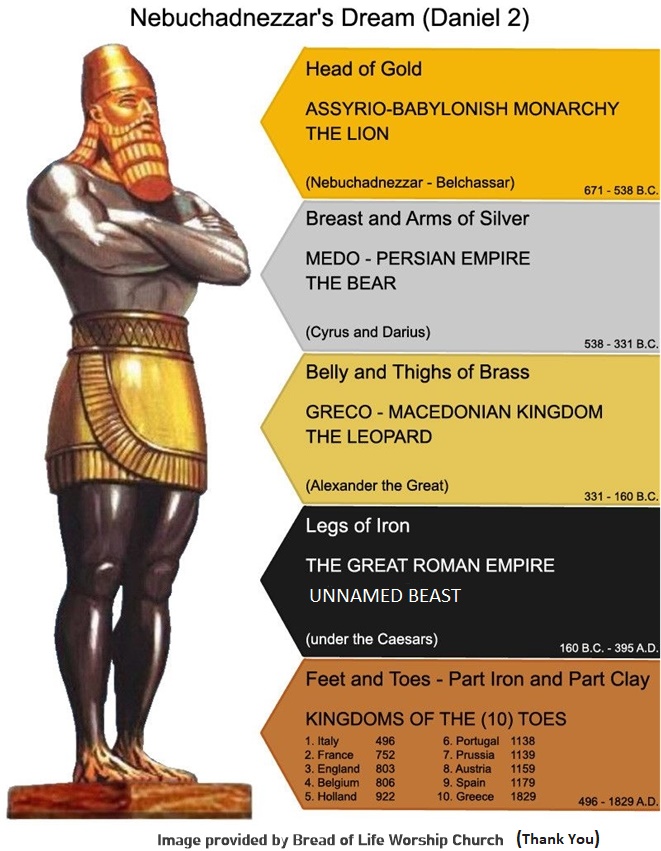 2nd. The Arms of Silver – The Bear (Medo – Persian Empire)

3rd. The Belly And Thighs of Brass – The Leopard (Greco – Macedonian Kingdom)
The Kingdom of Greece had four (4) heads
1. Cassander
2. Ptolemy
3. Antigonus
4. Seleucus