COULD IT BE THE ASTEROID APOPHIS IS WORMWOOD, COMING IN 2029?

Video Presentations: Tom Horn shares compelling evidence that the large asteroid (Apophis) approaching earth is wormwood. Listen to the presentations as they will speak for themselves. Get Tom Horn’s book on AMAZON.

This is the time to get yourself ready for the Lord’s coming is at hand.
(Rev 8:10-11 [KJV])
And the third angel sounded, and there fell a great star from heaven, burning as it were a lamp, and it fell upon the third part of the rivers, and upon the fountains of waters; 11 And the name of the star is called *WORMWOOD*: and the third part of the waters became wormwood; and many men died of the waters, because they were made bitter.

TTGM’s research results
It’s all coming together. DART is in motion to test what we will be able to do in shifting the orbit of an object in space. The mission time to start is 2021. This video outlines the mission plan. | UPDATE: The mission has been completed today Sep 26, 2022.

A paper was already submitted to the US Congress in 2018 on a plan to intercept the asteroid Apophis that is coming in 2029; for the purpose of tracking it. Question: Why would anyone need to place a tracking device on an asteroid that is in “open” space that can easily be observed by our earth-bound technologies – something is smelling. Read the bottom of page 60 of 82.

Do we believe this is wormwood based on what Tom Horn said?
1. Tom has had several prophetic visions in the past of people in his ministry and ALL that he said came true.
2. Tom saw the pope resigning years before it happened. He even wrote a book about the event before it occurred. In the book, he stated the resignation, month, and year it would happen. It all came to pass as he was shown by God. Get Tom Horn’s book called “The Last Pope? on Amazon.
3. Tom has been 100% prophetically right all the time every time. TTGM does not doubt him on Apophis. The standard for a prophet of God is 100% accuracy. To date, Tom has proven himself 100% accurate, and this qualifies him a true prophet of God. 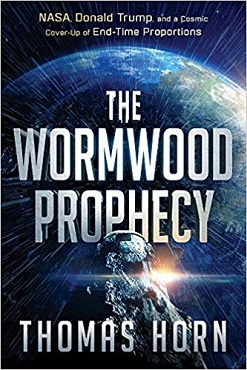