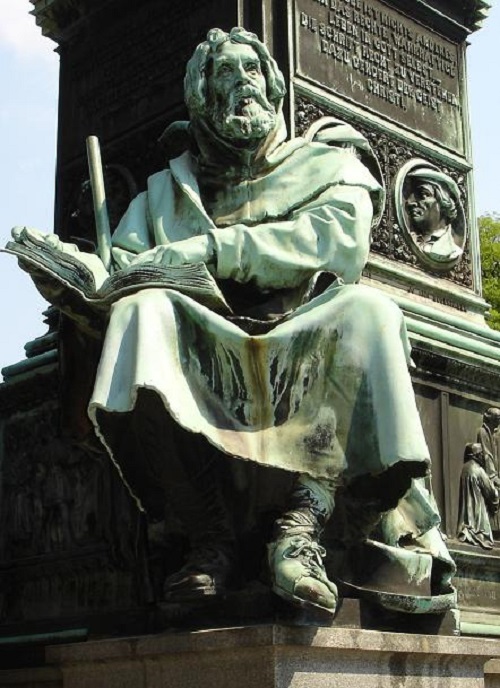 (1140-1205), credited as the founder of the Waldensians, a Christian spiritual movement of the Middle Ages, descendants of which still exist in various regions of southern Europe. Citation evidence by Eberhard de Béthune stated the name Waldenses more than 10 years before Peter Waldo, (1170) and the monk Bernard de Foncald wrote about the heretics who were known as “Valdensis” who were condemned during the pontificate of Pope Lucius II in 1144, decades before Peter Waldo. These extant citation sources clearly prove the existence of the actual name Valdenses existed prior to Peter.

Specific details of his life are largely unknown. Extant sources relate that he was a wealthy clothier and merchant from Lyons and a man of some learning. Sometime shortly before the year 1160 he was inspired by a series of events, firstly, after hearing a sermon on the life of St. Alexius, secondly, rejection of transubstantiation when it was considered a capital crime to do so, thirdly, the sudden and unexpected death of a friend during an evening meal. From this point onward he began living a radical Christian life giving his property over to his wife, while the remainder of his belongings he distributed as alms to the poor.

At about this time, Waldo began to preach and teach publicly, based on his ideas of simplicity and poverty, notably that “No man can serve two masters, God and Mammon” accompanied by strong condemnations of Papal excesses and Catholic dogmas, including purgatory and transubstantiation, while accusing them of being the harlot from the book of Revelation. By 1170 he had gathered a large number of followers who were referred to as the Poor of Lyons, the Poor of Lombardy, or the Poor of God who would spread their teaching abroad while disguised as peddlers. Often referred to as the Waldensians (or Waldenses), they were distinct from the Albigensians or Cathari.

The Waldensian movement was characterized from the beginning by lay preaching, voluntary poverty and strict adherence to the Bible. Between 1175-1185 Peter Waldo either commissioned a cleric from Lyons to translate the New Testament into the vernacular, the Arpitan (Franco-Provençal) language or was himself involved in this translation work. Regardless of the source of translation, he is credited with providing to Europe the first translation of the Bible in a ‘modern tongue’ outside of Latin.

In 1179, Waldo and one of his disciples went to Rome where they were welcomed by Pope Alexander III, and the Roman Curia. They had to explain their faith before a panel of three clergymen, including issues which were then debated within the Church, as the universal priesthood, the gospel in the vulgar tongue, and the issue of voluntary poverty. The results of the meeting were inconclusive, and Waldo’s ideas, but not the movement itself, were condemned at the Third Lateran Council in the same year, though the leaders of the movement had not been yet excommunicated.

Driven away from Lyons, Waldo and his followers settled in the high valleys of Piedmont, and in France, in the Luberon, as they continued in their pursuit of Christianity based on the New Testament. Finally, Waldo was excommunicated by Pope Lucius III during the synod held at Verona in 1184, and the doctrine of the Poor of Lyons was again condemned by the Fourth Lateran Council in 1215 where they are mentioned by name for the first time, and regarded as heresy. Fearing suppression from the Church, Waldo’s followers fled to the mountainous regions of northern Italy. The Roman Catholic Church began to persecute the Waldensians, and 80 were tried and sentenced to death in France. Following this, the Waldensians became critical of Catholic belief and would eventually merge with various forming protestant churches in the late 16th century. Centuries after Waldo’s death, this Christian movement connected with the Genevan or Reformed branch of the Protestant Reformation.