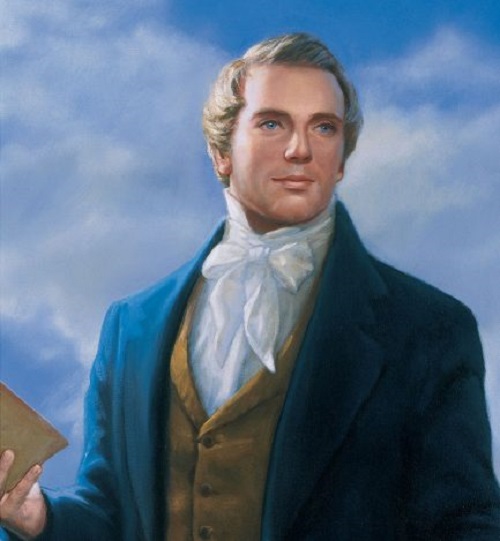 (1805-1844), American religious leader, who was the founding “prophet” of the Mormon religion.

“Prophet” Joseph Smith was born of poor parents in Sharon, Vermont, on December 23, 1805. The family moved near the town of Palmyra, in upstate New York, where between the ages of 14 and 25 Smith experienced visions calling him to restore the true Christian religion. According to his account, an angel guided him to a set of golden plates buried in a hill near the Smith farm; these contained a narrative written in a hieroglyphic script, which he translated, “by the gift and power of God.” The result was published in 1830 as the Book of Mormon, which he believed to be a religious record of the ancient inhabitants of North America.

The church Smith founded on April 6, 1830, soon known officially as The Church of Jesus Christ of Latter-day Saints, quickly attracted followers, many of whom served as lay missionaries. It also aroused opposition, with Smith as its focus. He suffered a violent tarring and feathering in Ohio and a jail term of several months in Missouri. After establishing a new headquarters at Commerce (which they renamed Nauvoo), Illinois, in 1839, Smith continued to provide charismatic leadership. Soon, however, rumors, later confirmed, that the Mormons had begun to practice polygamy provoked a schism in the Mormon community and intensified the opposition outside the church. Smith himself is believed to have had more than 27 wives, although he publicly acknowledged only one.

In February 1844, Smith announced his candidacy for the U.S. presidency. He was by then one of the most famous men of the American West. His base of appeal, however, was too narrow for him to have won election, and his political ambitions increased the hostility of non-Mormons. When a group of dissenting Mormons started to publish a newspaper attacking polygamy and his leadership, Smith ordered the press destroyed. This led to new threats of violence, and finally Smith was charged with treason and conspiracy and placed under arrest in the Carthage, Illinois, jail. There, despite the Illinois governor’s promise of safety, he and his brother Hyrum were assassinated by a mob on the night of June 27, 1844.
Extract from Microsoft® Encarta® Reference Library 2002. © 1993-2001 Microsoft Corporation. All rights reserved.

Joseph Smith: The Prophet of the Restoration? (1:01:57). Would Jesus Christ give a DIFFERNT LIGHT?