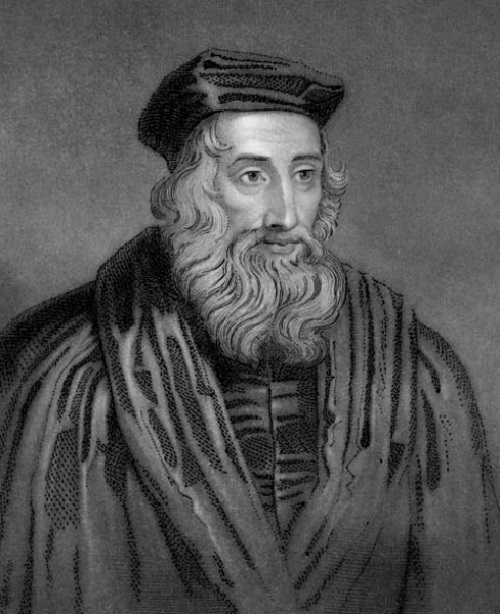 (1320-1384), English scholastic philosopher, theologian, Biblical translator, reformer, and seminary professor at Oxford. He was an influential dissident within the Roman Catholic priesthood during the 14th century.

Wycliffe attacked the privileged status of the clergy, which was central to their powerful role in England. He then attacked the luxury and pomp of local parishes and their ceremonies.

Wycliffe was also an advocate for translation of the Bible into the vernacular. He completed a translation directly from the Vulgate into Middle English in the year 1382, now known as Wycliffe’s Bible. It is probable that he personally translated the Gospels of Matthew, Mark, Luke, and John; and it is possible he translated the entire New Testament, while his associates translated the Old Testament. Wycliffe’s Bible appears to have been completed by 1384, with additional updated versions being done by Wycliffe’s assistant John Purvey and others in 1388 and 1395.

Wycliffe’s followers were known as Lollards and followed his lead in advocating Predestination, Iconoclasm, and Caesaropapism, while attacking the veneration of Saints, the Sacraments, Requiem Masses, Transubstantiation, monasticism, and the very existence of the Papacy.

Beginning in the 16th century, the Lollard movement was regarded as the precursor to the Protestant Reformation. Wycliffe was accordingly characterized as the evening star of scholasticism and the Morning Star of the English Reformation. Wycliffe’s writings in Latin greatly influenced the philosophy and teaching of Czech reformer Jan Hus, whose execution in 1415 sparked a revolt and led to the Hussite Wars.