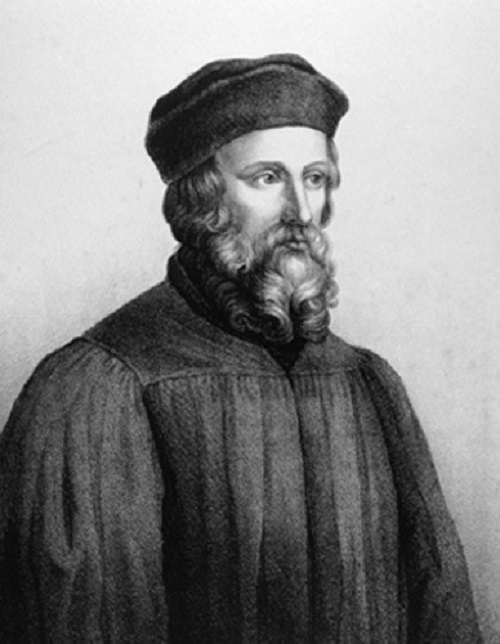 (1372-1415), a Czech priest, philosopher, early Christian reformer and Master at Charles University in Prague. After John Wycliffe, the theorist of ecclesiastical Reformation, Hus is considered the first Church reformer, as he lived before Luther, Calvin, and Zwingli.

Hus was a key predecessor to Protestantism, and his teachings had a strong influence on the states of Western Europe, most immediately in the approval of a reformist Bohemian religious denomination, and, more than a century later, on Martin Luther himself. He was burned at the stake for heresy against the doctrines of the Catholic Church, including those on ecclesiology, the Eucharist, and other theological topics.

After Hus was executed in 1415, the followers of his religious teachings (known as Hussites) rebelled against their Roman Catholic rulers and defeated five consecutive papal crusades between 1420 and 1431, in what became known as the Hussite Wars. A century later, as many as 90% of inhabitants of the Czech lands were Hussites. Although the Czech Republic was the site of one of the most significant pre-reformation movements, there are only few Protestant adherents; mainly due to historical reasons like persecution of Protestants by the Catholic Habsburgs, restrictions during the Communist rule, and also the ongoing secularization.

Jan Hus was born in Husinec, Bohemia, c. 1369. At an early age he traveled to Prague, where he supported himself by singing and serving in Churches. His conduct was positive and his commitment to his studies was remarkable.

In 1393, Hus earned the degree of Bachelor of Arts at the University of Prague, and he earned his master’s degree in 1396. In 1400, he was ordained as a priest. In 1402 Hus began preaching inside the city demanding for the reformation of the Church. He served as rector of the University of Prague in 1402–03. He was appointed a preacher at the newly built Bethlehem Chapel around the same time. Hus was a strong advocate for the Czechs, and therefore the Realists, and he was influenced by the writings of John Wycliffe. Although Church authorities banned many works of Wycliffe in 1403, Hus translated Trialogus into Czech and helped to distribute it.

Hus attacked the Church by denouncing the moral failings of clergy, bishops, and even the papacy from his pulpit. Archbishop Zbyněk Zajíc tolerated this, and even appointed Hus preacher at the clergy’s biennial synod. On 24 June 1405, Pope Innocent VII, however, directed the Archbishop to counter Wycliffe’s teachings, especially the doctrine of impanation in the Eucharist. The archbishop complied by issuing a synodal decree against Wycliffe, as well as forbidding any further attacks on the clergy.

In 1406, two Bohemian students brought to Prague a document bearing the seal of the University of Oxford and praising Wycliffe. Hus proudly read the document from his pulpit. Then in 1408, Pope Gregory XII warned Archbishop Zajic that the Church in Rome had been informed of Wycliffe’s heresies and of King Wenceslaus’s sympathies for non-conformists. In response, the king and University ordered all of Wycliffe’s writings surrendered to the archdiocesan chancery for correction. Hus obeyed, declaring that he condemned the errors in those writings.