IS HOMOSEXUALITY APPROVED BY GOD OR IS IT A SIN?

(Lev 18:22 [KJV])
Thou shalt not lie with mankind, as with womankind: it is abomination.

Is Homosexuality a Sin?

IMPORTANT – Use the King James Version of the Bible for study:
We trust and use the King James version because it was based on the majority text out of Antioch – Listen HERE. Corrupted versions water down key doctrines in scripture and it is, for this reason, we encourage serious believers to study from versions (eg. KJV) of the bible that are based on manuscripts that came from Antioch (the New Testament capital of the world).

OLD TESTAMENT:
Homosexuality is  Abomination (sin):
The Bible (KJV) speaks clearly to the believer that homosexuality is a sin as in the captioned verse (Leviticus 18:22 starts with “Thou shalt not”). The verse describes to “lie” (sex or intimacy) between two men is abomination. It goes on to say if a woman lies with a beast it is called confusion.

The punishment for Homosexuality is death:
(Lev 20:13 [KJV])
If a man also lie with mankind, as he lieth with a woman, both of them have committed abomination: they shall surely be put to death; their blood shall be upon them.

Some would say that the Old Testament law does not apply to New Testament Christians. Almost every time Yeshua (Jesus) was asked a question, He would refer to the Old Testament (The Torah) and give the answer (“have you not read” or “it is written” or, “it was said of them of old” etc). The apostles in their letters would also make reference to Old Testament scripture to explain doctrine. In the New Testament, it makes reference to “all scripture is profitable for doctrine, for reproof, for correction” etc. Timothy was referring to the Old Testament only. Why? The New Testament was not written yet or put together in the form it is in now. So searching the scripture to determine doctrine was primarily done on what Yeshua said and what was written in the Torah. (When the gospel was shared, scripture was the Torah or the prophets).
(2Tim 3:16 [KJV])
All scripture (Torah only, as New Testament was not yet written) is given by inspiration of God, and is profitable for doctrine, for reproof, for correction, for instruction in righteousness:

Nb. There was never any intention to disregard the Old Testament after the advent of the New Testament; but rather the words of Yeshua and His apostles were meant to explain the fulfillment of scripture/Torah in Christ. So we use the words “thou shall not” as written in Leviticus for reproof, to correct all homosexuals. 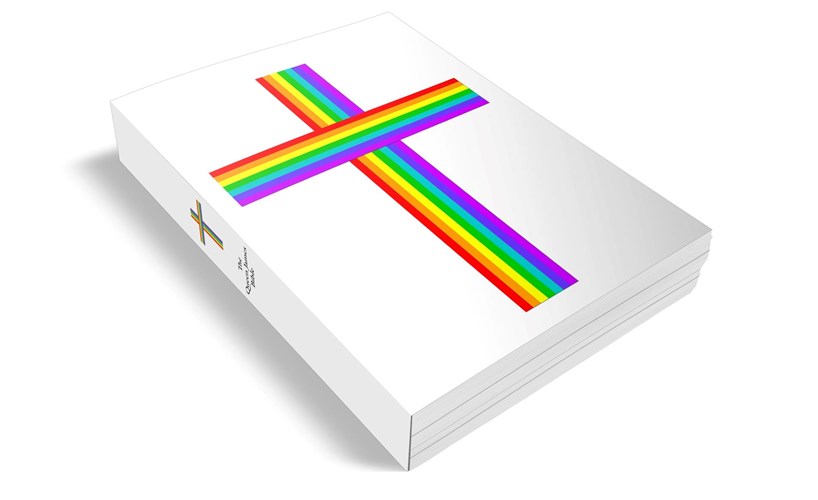 What do proponents of LGBTQ do to support their twisted beliefs? A NEW Bible version to the rescue:
Satan is on the march in his attempt to normalize homosexuality. There is now the “Queen James Bible” that takes out/changes verses that condemn this abomination – visit site HERE. For your eternal soul’s sake, stick with God’s true word as written (eg. KJV). Eternity is a long time to spend in regret.

To say that there is no mention of homosexuality in the bible is an outright lie. To say that homosexuality is not a sin would be an exercise in purposeful ignorance leading many astray.  It would mean ignoring the book of Leviticus, and this is nonsense; an outright, blind, and purposeful denial of truth for the sake of an abominable sin. This same sin with others God detested by demonstrating His judgment on the cities of Sodom and Gomorrah. Even in blindness the men of the city still wanted to lie with the sons of God (God’s Angels).
(Gen 19:4-11 [KJV])
But before they lay down, the men of the city, even the men of Sodom, compassed the house round, both old and young, all the people from every quarter: 5 And they called unto Lot, and said unto him, Where are the men which came in to thee this night? Bring them out unto us, that we may know (have sex) them. 6 And Lot went out at the door unto them, and shut the door after him, 7 And said, I pray you, brethren, do not so wickedly. 8 Behold now, I have two daughters which have not known man; let me, I pray you, bring them out unto you, and do ye to them as is good in your eyes: only unto these men do nothing; for therefore came they under the shadow of my roof. 9 And they said, Stand back. And they said again, This one fellow came in to sojourn, and he will needs be a judge: now will we deal worse with thee, than with them. And they pressed sore upon the man, even Lot, and came near to break the door. 10 But the men put forth their hand, and pulled Lot into the house to them, and shut to the door. 11 And they smote the men that were at the door of the house with blindness, both small and great: so that they wearied themselves to find the door.

Even in blindness they burned in themselves and struggled (wearied themselves) to find the door to get to the men; this could only be utter depravity.

Good News, there is deliverance from this depravity – Watch these presentations also visit Restored Hope Network for support.